Difference between revisions of "Zircon" 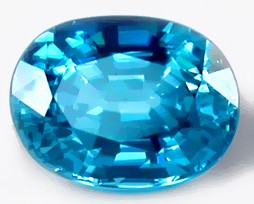 Zircon is a mineral species that can be broadly defined as a zirconium silicate containing trace amounts of the radioactive minerals hafnium, uranium and thorium. Over time, these radioactive components break down the lattice of the crystal, eventually (over tens of thousands of years) destroying the internal crystal lattice and leaving it with an amorphous structure and a dark, pithy appearance.
Zircons that are geologically young and unaffected by radioactivity are termed "high" zircons. These stones are transparent golden, yellowish-green and greenish-brown in color with incredibly high dispersion. "High" zircons can be heated to temperatures greater than 900 degrees Celsius, when they become colorless, blue or golden.


These highly dispersive colorless stones have long been used as diamond substitutes. That's why the name zircon has the connotation of synthetic or imitation. It was used to imitate a diamond, but the stone is indeed naturally occurring. It should not be confused with the synthetic cubic zirconium (zirconia) or "CZ", which is laboratory created as zirconium oxide and is in no way related to naturally occurring zircon.

Zircons in which the crystal lattice has been broken down are named "low type" zircon. These are also named "metamict" as the lattice destruction process through alpha particale decay is termed metamictization.
Zircons that are in a transitional state between high and low type are termed "intermediate" or "medium" type.

One of the most typical features of zircon (high type) is the high double refraction. White zircon is almost always heat treated (from reddish-brown zircon) and this heat treatment also restores the crystal lattice to high type, so it will show clear doubling of pavillion facets in faceted stones when viewed through the crown.
As white zircon may mimic a diamond, the "dot test" is a very valuable one. Zircon is the only strong doubly refractive diamond simulant that has a refractive index lower than diamond, but is still over the limit of a gemological refractometer.

Zircons (especially high type green and yellow ones) show a typical uranium spectrum with up to 40 lines. The most diagnostic line will be at 653.5 nm
However some zircons, like metamict type or heat treated white and blue ones, may show only a faint line at 653.5 nm. The red-browns from New South Wales, Australia and Cambodia may not show a spectrum at all.

Blue zircons have a green reaction under the CCF. Orange-browns ("hyacinth") will show up orange-red.

Only 2 of the most common, natural, gemstones are uniaxial with a positive optic sign, zircon and quartz (phenakite, cinnabar and some idocrase are also uniaxial +, aswell is synthetic moissanite).
Quartz will usually show a bull's-eye (or quadruple Ariry Spirals), so if you find a positive optic sign on a typical uniaxial interference figure you might suspect zircon. Of course you will need a retardation plate to determine the optic sign.

It should be noted that, due to metamictization, some zircons will not show an interference figure and these stones remain dark on rotation between crossed polars.

Zircon is brittle and may show abrasion on facet edges. When sending out lots of zircon, be sure to wrap each stone individually to prevent this "paper wearing" effect.

Zircon is routinely heat treated. This heat treatment has two effects on the gem:

Heat treatments are carried out in either a oxidizing or a reducing atmosphere (or a sequential combination).

Although colorless, blue and red zircon does exist in nature, they are very rare and there is no known means available to distinguish between them and their heated counterparts.

Zircon to calculate the age of the earth

Zircon forms in granites deep in the earth's crust (plutonic rock). Through movement of tectonic plates, this granite is brought to the surface and starts mountain building. Through erosion, the granite (and the contained zircon) builds sediments which will eventually be buried deep enough to transform into metamorphic rocks.

Due to its hardness of 7.5 on the scale of Mohs, the zircons usually survive the sedimentary process intact. Because of its resistance to chemical attacks, zircon will survive the contact metamorphism process which is trying to attack it with heat and pressure. The latter is important as the liquid mass surrounding the zircon will cause a new rim to be formed around the old zircon, just like the formation of tree rings. This first cycle usually will take hundreds of million years.

The old crystal with its newly formed rim is then pushed up again through tectonic plate interactions, then this geologic cycle repeats itself.

A third and well known property of zircon is that it can accommodate radioactive elements like uranium. Uranium has the ability to decay into lead at a fixed time rate. Calculation of the uranium-lead ratio may give a clue of the age of the zircon (and thus Earth's age). However, lead may leak from the zircon, disturbing the uranium-lead ratio.

Fortunately, scientists found a new way of calculation by using isotopes. The uranium-238 isotope (with a half-life of 4.468 billion years) decays to lead-206, while uranium-235 (with a half-life of 703.8 million years) decays to lead-207. The "secondary ion mass spectrometry" (or SIMS) technique is used for this kind of measurement. By measuring both 'parent-daughter' decays of both these processes, an accurate age of the zircon can be calculated -- that is, if both measurements are consistent (which is not always the case).

The Isua rocks on Greenland are a source for this way of dating the earth's age. Current calculations indicate Earth is 4.6 billion years old.