Common spinel is isotrope and will remain dark under crossed polars.
Verneuil type synthetic spinel will always (maybe with the exception of red) show strong anomalous birefringence due to excess Al2O3 (see synthetics). This anomalous extinction (as it is currently named) can be seen as "tabby" extinction, resembling the color distribution of a cat's fur, or/and as an Andreas cross.

Spectrum of a natural blue spinel, colored by iron.

It was found that while trying to synthesize spinel through the Verneuil process, the resulting boules would easily fracture and no reasonably sized gemstones could be cut from them.
The ratio MgO to Al2O3 is 1:1 for common spinel and by changing that ratio (adding Al2O3) the boules became stable. Because that alters the chemical formula of the synthetic, it is not a true synthetic (but accepted as such).

For the creation of red stones, this alteration was no option and, usually, no red synthetic spinel boules created by the flame-fusion process result in large stones (but are known to excist). The larger sized red synthetic spinels are created with the flux-melt method.

As a result in the changing of the MgO:Al2O3 ratio, the flame fusion synthetics have higher refractive indices (usually stable at 1.726) and a higher specific gravity (3.64).

First commercial production of flux-melt synthetic spinel started around 1980, although successful experiments date back to 1848 (by the French chemist Ebelmen). 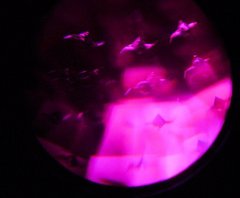