Difference between revisions of "Riesling" 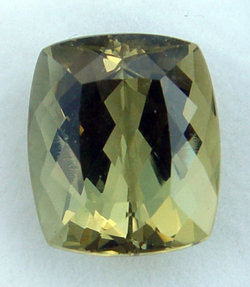 Riesling beryl was first discovered by a German geologist in 1840 near a small village in East Germany, but unfortunately the amount they found was small. The bulk of the material was cut and given to royalty as gifts or sold to private collectors at the time. (The majority of the stones are thought to have stayed in Germany, although some particularly fine specimens were thought to have gone to the British Royal Family as gifts). This link to royalty is one of 4 key components in the pricing this stone.

This stone is actually a pale green color, with a warm golden yellow flash. It is strongly dichroic (green yellow), which is a second key pricing component as this is unusual in beryl.

It also has a refractive index of 1.59 which is high for precious beryl, and is the third key component in pricing. It makes an attractive, sparkly cut stone. (As with all beryl, it is a 7.5 on the Mohs Scale, SG 2.66-2.86)

As there was so little of the material available, it disappeared quickly and was not found again until November 2002, so its rarity is the fourth main pricing component.

At that date, the Everhart family (originally from Germany themselves) found it in Vale of Jequitinhonha near Arcuaii in Brazil. The family was mining for morganite and came across greenish golden stones that were initially thought to be hiddenite. Testing proved them to be beryl.

Still only a small pocket of stones, the rough was exhausted and sent to Italy to sell and exhibit. Remaining rough was sold in the US for cutting and distribution. Some dealers still have material available, but they are very hard to come by. A second pocket, larger than the first Brazilian find, was found in March 2004 but it still produces relatively small amounts of material.

Some collectors recognize only the German material as true Riesling. The only way to be sure from an investment perspective is to obtain a stone with a known provenance. It is difficult but doable. Any good German dealer with a fine reputation will be able to get you one within a week, but the price may be high.