Maxixe (pronounced Mah-she-she) is the almost-sapphire color variety of beryl. It was discovered in 1917 in the Maxixe mine in the Piaui area south of Arassuahy, Minas Gerais, Brazil. Maxixe owes it's very unstable color due to natural irradiation that causes a color center most probably in the NO3 sites. When exposed to sunlight or temperatures above 100° C, it will rapidly lose its color. Color can be restored by irradiation (gamma, x-ray or neutron) and annealing.
As of around 1970, some dark-blue beryls started appearing on the market again and research showed that the color was also due to irradiation (artificial), but the color center in this case proved to be in the CO3 sites. This new type was named "Maxixe-type" beryl and, like Maxixe, it is a very unstable color. The original color of these beryls was yellow or green.
There are also bi-colored Maxixe-type beryls (yellow/blue). Their color is attributed to artificial irradiation on specimens that have uneven distribution of impurities.

The impurities found in Maxixe and Maxixe-type beryl are Cs, Zn, Li, Rb, B and high concentrations of Fe.

As the color is mainly caused by a color center, this is not an aquamarine beryl but a variety on its own.
Both the nitrate and carbonate varieties can be irradiated by natural and artificial means, and their distinction is not possible with standard gemological instruments. Therefore, Kurt Nassau suggested dropping the Maxixe-type nomenclature and name both Maxixe. 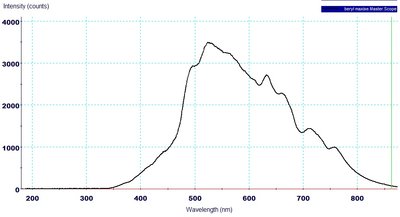 Deposit reported in 2003 in the Yukon: but this article mentions they weren't sure if it were maxixe: