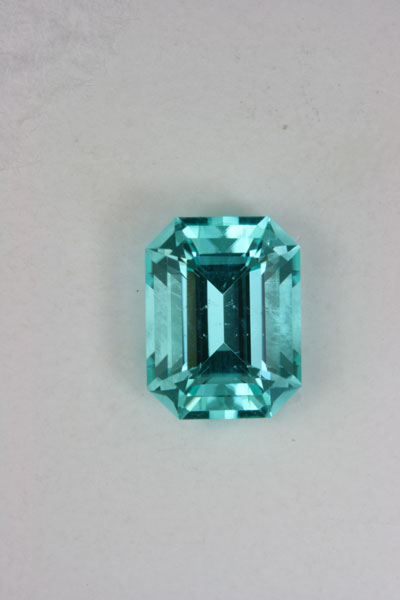 This traditional emerald cut weighs 1.84 carats. This treasured tourmaline is the last of its breed in the collection. I once had three examples of this glowing type of tourmaline, but a couple have been squeezed out of me. The saga of the group starts before Laurellite, a new variety of tourmaline that I named after my older daughter, and the discovery of copper in tourmaline from Mozambique. A good selection of rough appeared on Brian Norton's special page and the photographs really did not do justice to this tourmaline. It was still different, so I order the best piece I could. When I received the rough, I craved for another bite and sure enough Brian still had some available. I gave him card blanch to give me the best remaining piece. So now there were two, but the hunger grew and I would bite at the occasional sighting of another bright blue green pebble. I wasn't very successful, for other lurked after these beauties, that were not that highly prized. The only explanation I can give for the modest price is that cuprian paraiba type rough really doesn't show its glow strongly, until it is cut. Cut and without any hoopla over Paraiba and copper etc. the gems grab you eye and demand attention even in a tray of beauties. I felt that their something different had to be copper for sometime, but I kept reading about failed attempts to find copper in many blue green tourmaline. I also didn't want to waste hundreds of dollars testing, when a guy like me should never find what bigger actors had been looking for, for years. Still I sent in Laurellite, because it was so different, to the GIA to be tested. The discovery of copper in Laurellite, made me sure that these glowing examples of tourmaline were also cuprian. Finally one of my friends, that had gained a piece, had it confirmed cuprian by the GIA. Now my spectrometer also sings its praises, but the eye rejoices the most.