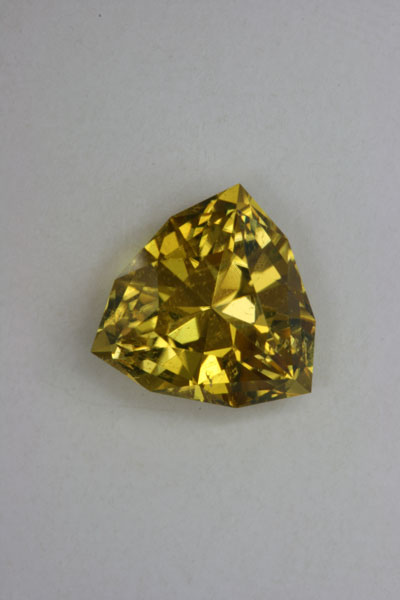 This shield cut weighs 3.24 carats. The rough came from Zambia and was purchased as two good sized water worn semi-facet grade nodules. The rough was so frosted over and broken by some major flaw complexes and growth tubes, that the inexpensive rough had been halved in price to sell it. Still it was the color that drew me to it, with or without flaws, since it had the least amount of green in a yellow tourmaline, that I had been able to get a hold of. After I sawed the nodules apart along the major flaws, I found a better color than I had hoped for and the rough, while not clean, was still able to cut small bright pretty gems. This is the best of the lot in size, color and clarity. The light inclusions do not detract from my best medium toned, bright yellow tourmaline. I don't know how it rates with the "canary" tourmaline that has come on the market since, but I prize this gem highly.