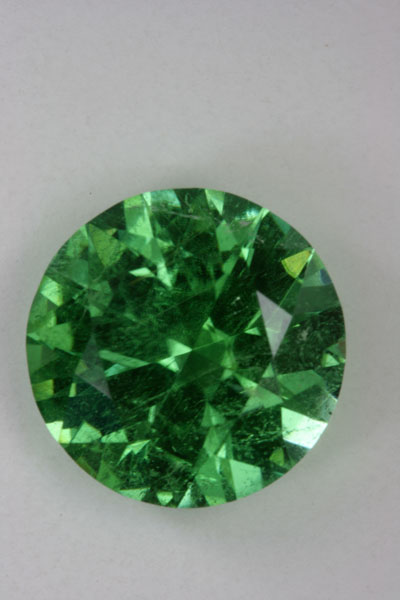 The round standard brilliant weighs 6.03 carats. The gem's evenly distributed, moderate level of inclusions, do effect the clarity of the gemstone. I love this stone. Threw the inclusions comes a color, tone and saturation that can not be denied. I had it tested by an electron beam and founded not to have copper. I had it tested with a spectrometer that only looked at the visible range of frequencies, so the seminal 900nm peak generated by copper could not be observed (I didn't realized it at the time). The spectrometer did showed the classic twin peaks that were very symmetrical in this case, one at each end of the visible and a deep valley in the midrange of pure glory. Now I should have given up on copper in this stone, but I found out later that the coppers for the electron beam were not good that day. I have beautiful Afghanistan greens, but they tend to be dichroic and this gem has a uniform green. I have beautiful "chrome" tourmaline in my collection, but they tend to darker tones and purer saturation. So when I put the probe of my spectrometer to the table I still had hope. I was rewarded with a good indication of copper. A gem that probably came from Mozambique before copper was discovered there, had finally confessed why it was different. The eye had not failed me.