Difference between revisions of "Essays:Adding arrows"

When a light source is pointed at a reflecting surface, we are taught that the reflection will reach a point on the opposite of the normal and that the angles of incidence and the angle of reflection are equal. The incident ray, the reflected ray and the normal all lie in the same plane. That is the "law of reflection". A logical interpretation of that might be that light will always follow that path of least distance (or even least time). That raises a few questions, as how much of the light will be reflected from the glass plate. Or even worse, if we would paint a portion of the glass black, would it still be able to reflect light from lightsource A to detector point B? According to the usual law of reflection, the latter should not occur. In reality it can. 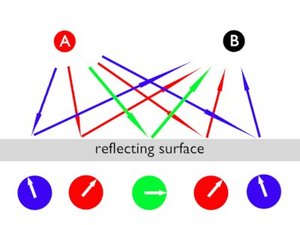 If we were to take a stopwatch with counter clockwise rotating hand, the hand would stop at a different "hour" for every of these paths and we can think of the direction the hand is pointing to as an "arrow" (as indicated at the bottom of the image).