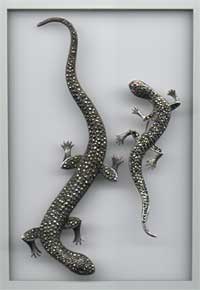 Marcasite is a misnomer, referring to the mineral pyrite when it is faceted into small reflective stones and used in jewelry. Marcasite and pyrite are both iron disulfides but they are different minerals because they crystallize in different systems and form under different geologic conditions. Marcasite isn't suitable for use in jewelry because it is unstable and can decompose in the air, appearing to acquire a chalky coating. Pyrite is named after the Greek word for fire as it produces sparks when struck by iron. 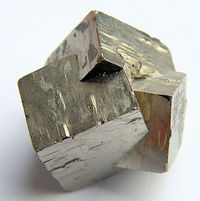 Pyrite crystallizes in the cubic system and can form perfect cubes with shiny metallic gold faces.
Native Americans believed that pyrite "mirrors" allowed you to see inside the soul.