Opal is a mineral species with an amorphous structure. It's composition is silicon dioxide with a variable amount of water. The amount of water (H2O) is usually between 2-10% by weight, although contents as high as 20% have been recorded. When opals undergo dehydration as a result of exposure and time they have a tendency to become crazed, showing minute cracks on the polished surfaces.

In 2000, The Australian Gemstone Industry Council established nomenclature and classification standards for all types and origins of opals, This classification has been adopted internationally.
Opals can be broken down into 2 basic categories: 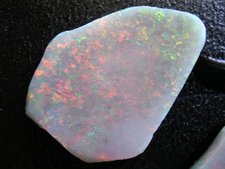 Type 1: A single, solid piece of precious opal, having a uniform appearance and composition. This is the type of opal most commonly used for jewelry
Type 2:Precious opal that is attached to its host rock (a non-opal) in the form of a layer or seam. Boulder opal is an example of this. The opal is attached to a brown, iron-stained sandstone.
Type 3: Matrix opal occurs when precious opal fills cracks and openings in the host rock. The opal forms in pre-existing clay or sandstone. This material is frequently dyed.
Doublets & Triplets: These assembled stones are not considered natural opals, although they do contain a layer of natural opal. 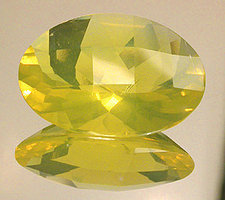 Judge the body color of an opal "face up".
Example:
If an opal has very dark potch on the back, giving it the appearance of N5, it should be graded as N5. 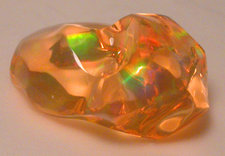 Opals can vary in degrees of transparency from transparent to opaque. When an opal is transparent or semi-transparent it is referred to "crystal". This is true regardless of the body tone. "Crystal" refers to the glass-like appearance of the gem, NOT a crystalline structure.

The firms of Gilson in France and Chatham in the United States currently create synthetic opals. They are produced with white and black body colors. Chatham also markets a "crystal" type which exhibits a colorless body with play of color.
This laboratory created material was first marketed by Pierre Gilson, Sr. in 1974. It involves a 3 stage process involving the purification of chemicals involving fractional distillation. This is characteristically an elaborate process invoving consolidation of these refined chemicals under water pressure. The result is the creation of microscopic cristobolite silica spheres (SiO2) of uniform size. They are allowed to settle in the containment vessel for over a year in a hydrous solution of controlled pressure and acidity. Then, a hydrostatic press is utilized to consolidate the microspheres from a liquid phase into a solid phase, resulting in synthetic opal rough which can be cut into cabochons.