Difference between revisions of "Math"

Although the study of gemology requires no formal prior training, a high school diploma would make it easier to understand basic math. Knowledge of trigonometry especially might serve you well.

Below are some basic calculations that you may want to understand.

Some people have trouble with cross multiplications, while it is fairly easy if you keep a simple equation in mind.

This would probably make more sense in the following equation: 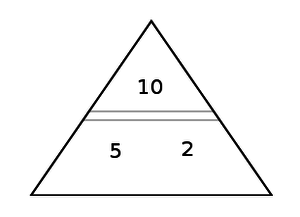 We can do it easier with the aid of a simple diagram. In Fig.1, you see a triangle with the equation 10 = 5 x 2 (the "x" is left out). The double horizontal bars serve as the "=" sign OR as the "/" (division) sign.
With this simple diagram in mind you can solve most simple cross multiplications.

How to read the triangle:

It works the same when you start with 5.

This is of course not much fun because all the answers are given. But this simple knowledge is basic when you want to solve an equation such as:

If all else fails, keep <math>5 = \frac{10}{2}</math> in mind and substitute the numbers for the unknowns in the equation you need to solve.

The sine, cosine and tangent are used to calculate angles.

In Fig.2, the 3 sides of a right triangle (seen from corner A) are labeled Adjacent side, Opposite side and Hypotenuse. The hypotenuse is always the slanted (and longest side) in a right triangle.

The opposite and adjacent sides are relative to corner A. If A would be at the other acute corner, they would be reversed.

Sine is usually abbreviated as sin.

You can calculate the sine of a corner in a right triangle by dividing the opposite side by the hypotenuse. For this you need to know two values:

Now that you have the sine of corner A, you would like to know the angle of that corner.
The angle of corner A is the "inverse sine" (denoted as sin-1 or arcsin) of the sine and is done by complex calculation. Luckily we have electronic calculators to do the dirty work for us:

When you know the angle a corner makes, lets say 30°, you can calculate the sine as follows:

That should give you 0.5

If you know the angles of incidence and refraction in a gemstone, you can calculate the refraction index of that gemstone. Or do other fun things like:

so using the inverse sine:

It's not all rocket science. Read the page on refraction if you don't know what is meant by angle of incidence and angle of refraction.

Calculating the critical angle of a gemstone is pretty easy although the formula might scare you.

Where n is the refractive index of the gemstone.

The actual formula is arcsin(n2 / n1), but as we gemologists usually are only concerned with the critical angle between air and the gem, n2 = 1.

The calculation of this formula is easy, we'll use quartz with n = 1.54 as an example.
When you use a windows calculator, make sure you are in scientific mode. Then press the following buttons:

Then check the "inv" checkbox and press the "sin" button. That should give you an approximate value of 40.493, so the critical angle for quartz is 40.5° (rounded down to one decimal).

The cosine of a corner in a right triangle is similar to the sine, yet now calculation is done with the division of the adjacent side by the hypotenuse. The cosine is abbreviated as "cos"

Again as with the sine, the inverse of the cosine is the arccos or cos-1:

The 3rd way to calculate an angle is through the tangent (or shortened to "tan"). The tangent of an angle is opposite side divided by adjacent side.

This should give you 36.87, so through this method of calculation the angle of corner A is again 36.87°.

A simple bridge to remember which sides you need in the calculations is the bridge SOH-CAH-TOA.

When we think of degrees we usually associate it with temperature and we consider minutes and seconds as attributes of time. However, in trigonometry, they are used to describe angles of a circle and we refer to them as the radian values.

A full circle has 360 degrees, or 360°.
Every degree can be divided into 60 minutes (like in a clock) instead of the 10 decimal subdivisions.
Minutes are notated with a ', as in 26'.
The individual minutes are further divided into 60 seconds and they are described with '', as in 23''.

This may look odd at first, but it's not very hard to understand.

When you want to calculate the radian value of 24.439°, you do the following:

Even though you may not need this knowledge often, it is important that you at least know of its existence as you may get confused when reading articles. Sometimes values are given in decimal degrees, at other times in radian values.

Next: The Equipment and Tools for Identifying Gems