Isomorphous replacement is the replacement of certain elements in a gemstone by another element of the same valency, without the gemstone changing in form. The word isomorph comes from iso (same) and morph (form). Thus, although the chemical makeup of the gemstone changes, the crystal form does not. The favorite gemstone variety used to explain this phenomenon is the garnet group.

When explaining isomorphous replacement, the garnet group is most suitable for illustration.

One can divide the garnets into two main groups (refer to garnet for a detailed explanation).

Each member of these two groups has an "ideal" chemical makeup. For instance, for the pyralspites this will be:

In the pyralspite list above, the first element mentioned changes from member to member. However, in nature one will never find a pyrope garnet with such a pure chemical makeup. Instead, during growth other elements -- present in the melt from which the pyrope grew -- were mixed in.

When iron (as seen in almandine, above) is mixed in during the growth of a pyrope garnet, one would get a magnesium-iron aluminum silicate. Part of the magnesium content in the pyrope was replaced by iron.

It is the amount of magnesium/iron content that defines the distinguishing line between pyrope and almandine. When there is an abundance of magnesium in the chemical makeup, it is a pyrope. When iron is dominant, it is almandine garnet.

When the mix is somewhere in between, we name it pyrope-almandine garnet. (These mixtures may have some exotic names, such as rhodolite, that are not of importance here). It should be noted that the boundaries where it is a pyrope or where it is an almandine is under heavy debate.

As can be seen in the "timeline" image showing the replacement of magnesium with iron, the physical and optical properties of the gemstone change as well. In this example (pyrope-almandine), note that the index of refraction and the specific gravity increase.

In the above example pyrope (magnesium) and almandine (iron) are two "end members" with a whole range of possible values in between, depending on how much magnesium or iron is present in that specific gemstone. 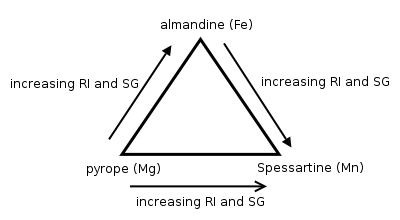 One could draw likewise "timelines" between pyrope and spessartine, or between almandine and spessartine. From the "pyralspite triangle", it is obvious that between the 3 "end members" of the pyralspite group every value is possible and that physical and optical properties vary at great length.

The latter is very important to remember when testing garnets, as no value will be the same. Instead, values will fall within a "range". In fact, there may even be a mix of all three of the end members.

The habit of the garnet, however, does not change.

Note: The mixing of elements occurs at the time of formation of the gemstone, not afterwards. So the isomorphous replacement does not happen after crystallization.

The chemical formula of garnet is L3M2(SiO4)3, which means that the first element has a valency of 2+. Elements with the same valency can easily replace each other to form new chemical bonds, as in the case of garnet. One should not confuse the presence of trace elements with isomorphous replacement. Trace elements are not part of the "ideal" chemical makeup.

Besides garnet, there are other gemstone varieties that show isomorphic replacement:

When two ions are brought together, there is a distance where a force of repulsion abruptly sets in and resists any closer approach. It is convenient to consider the ions as "spheres" in contact, and the distance between their centers is taken as the sum of the radiis of the two ions. Anions, such as an oxygen ion, have large ionic radii, whereas cations have radii that are much smaller.

The common cations which enter the structure of crystals are often those with similar sized radii, and can replace each other within the structure without unduly straining the space lattice. This accounts for the phenomenon of isomorphism and isomorphic replacement.

In the garnet and spinel groups, magnesia (MgO) and ferrous oxide (FeO) replace one another extensively. Likewise, alumina (Al2O3) and ferric oxide (Fe2O3) can easily replace each other within a crystal's lattice. When such a replacement takes place, there can be a significant variation in chemical composition without much effecting the internal structure. This accounts for the fact that, in certain gemstones of the same species, the specific gravity and refractive indices are not constant from specimen to specimen. In some species like garnet, spinel, tourmaline and some members of the beryl group (as beryl, stoppaniite, Indialite and bazzite), the values for refractive index and specific gravity can vary within wide parameters. This is an important factor to keep in mind when testing gemstones.