Inclusions can be generally defined as a foreign body, liquid, gaseous, solid, alone or in combination enclosed in the mass of a mineral. In gemology, we will expand that to also include cleavage cracks, fractures, color zoning, growth lines and included crystals of the same composition. Almost all gem materials, whether naturally occuring or man-made, will contain inclusions.
Some may be quite attractive or invisible to the eye. Others may be large and ugly and lessen a gem's value. Certain inclusions, like byssolite in demantoid garnet can increase a gem's value.
Do not confuse the word "inclusion" with the often derogatory terms "imperfections" or "flaws" that have been used in the diamond trade. These descriptions should not be used when referring to inclusions in colored gems.

Inclusions can be classified under two headings. First, as a function of the material that composes them, such as solid, liquid or gaseous. Secondly, when they were formed relative to the formation of the crystal that encloses them. One can simply refer to them as pre-existing, contemporary or postfomed. 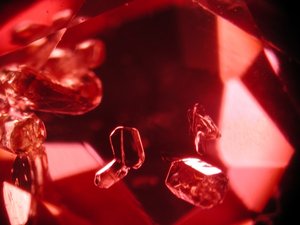 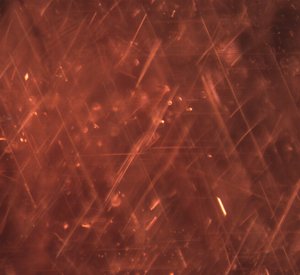