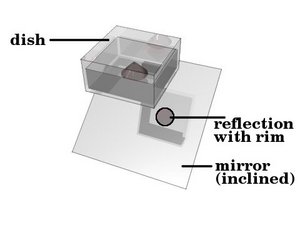 There are circumstances when one can not use the gemological refractometer but still needs to know the approximate index of refraction of a gemstone.
It is no secret that when you insert a drop of water in a glass filled with water, the drop will will disappear. Although there are other reasons to why that happens, the focus now will be on the indices of refraction of the drop of water and the water in the glass.

There are many liquids one can use and in cases that this technique needs to be applied to estimate the refractive index of a gemstone, it is best to immerse the stone in several liquids with progressive RI values. The RI of the stone will lie between the RI values of the liquids in which the stone casts the smallest shadows. In the case there is no casted shadow, the RI of the liquid is equal to the RI of the gem.