Some gemstones have more than one refractive index (RI) because these stones belong to crystal systems (anistropic) that have atomic structures which cause an incident ray of light to be resolved (split) into two separate rays. This phenomenon is named "double refraction".
The maximum double refraction of a gemstone is named "birefringence". 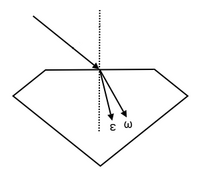 The maximum RI difference between these two rays is named "birefringence", often indicated by the symbol "Δ" (Greek letter delta). This maximum double refraction is largest when light enters the gemstone at an angle perpendicular to the optic axis. When light enters the gem at an angle parallel to the optic axis, the birefringence will be 0 (zero).
Although in gemology the term "birefringence" usually indicates the maximum difference between the ordinary and extra-ordinary rays (or the α and γ readings in biaxial stones), the term is also applied to any variation in refractive indices. Not just the maximum.