The refractometer is one of the most important tools in a gemological laboratory. It indicates (not measures) the refraction index of a gemstone, which often gives vital clues to the identity of a gemstone.

Although one would expect a refractometer to measure the refraction of light inside a gemstone, this is not the case. Instead it is based on a unique optical phenomenon named Total Internal Reflection (or TIR).

Construction of a gemological refractometer 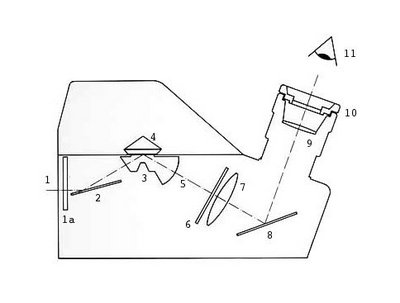 Light (1) enters through the rear of the refractometer through an opening (1a) in (or before) which a yellow sodium filter can be placed. It then hits a mirror (2) which transmits the light to the center of the hemicylinder (3).
This hemicylinder is made of high refractive glass (usually LaSF35 by Schott with a refractive index of ~ 1.88 at nD and a hardness of about 6.5 on Moh's scale).
At the boundary between the hemicylinder and the gemstone (4), the light will be partially refracted inside the stone and partially reflected in the hemicylinder (see Total Internal Reflection). The reflected rays (5) will pass through a reading scale (6) and a lens (7) or a series of lenses, depending on the type of refractometer.
The reflected rays hit a mirror (8) which directs the light to the ocular (9) and then outside the refractometer to your eye (11).
The ocular (9) can slide in and out for better focus and is usually accompanied with a detachable polarizing filter (10).

As the hemicylinder has a relative low hardness compared to most gemstones, care must be taken not to scratch it. That would ruin your refractometer, as optical contact between the gemstone and the cylinder would be impossible and would give you false readings.

Proper lighting is one of the key features when using the refractometer.

Although one can get results using a white light source, the standard is monochromatic yellow light with a wavelength of about 589.3nm. This light source is historically used as it was easily produced by burning table salt in a candle (at a very low cost). All gemological refraction indices are based on the use of sodium light.

The use of different wavelengths can produce different readings due to dispersion. As the refractive indices of gemstones are measured with an accuracy of 0.001 decimal, sodium light should be used. All gemological tables of refractive indices are produced using this light unless otherwise stated.

White light may be used for single refractive gemstones or to obtain a first impression. One will see an area with the spectral colors and you should look for the boundary between the green and the yellow of the allochromatic white light source, as that yellow portion is equivalent to sodium light.

However, for double refractive gemstones, one should then switch to a sodium light source, simply for the reason that the double refraction readings in white light may easily overlap and it would be impossible to get a correct reading. And of course the boundary between the lighter and darker areas is better defined, making the reading easier to take.

Always buy a refractometer with either a sodium filter or a sodium light source.


Liquids with higher RI are available, but they are so toxic that they are only used in specially equipped laboratories. They would, of course, also need a special hemicylinder which will be of higher RI than the liquid.

You should always shield your contact liquids from light (especially for the 1.81 type) and care should be taken not to let the liquids crystallize.

The chemical compositions of the liquids are:

Always wash your hands after you make physical contact with the liquids -- not only for the smell.

Use of the refractometer

As with every instrument, success depends on proper usage.

At this point, the contact liquid will suck under the facet and provide an optical contact between the stone and the hemicylinder. Do not apply any pressure to the stone by pushing it down on the cylinder as that would damage the hemicylinder. (Repairs are very costly.) Close the lid of the refractometer to shield the stone from any surrounding light. Remove the polarizing filter if it hasn't been removed already.

Now, with the light source in place at the back, place your eye just before the ocular of the refractometer. You should position your eye so that you look at a straight angle to the eyepiece, to prevent a "parallax error". The best way to know your eye is in the right position is if you can see the whole scale (or most of it) without moving your eye and that the horizontal lines on the scale do not double.

Now find the dividing line between light and dark on the scale. (For gemstones cut en-cabochon, the technique is slightly different. See the "distant vision" method below.) If the scale seems blurry, you can slide the ocular in and out for better focus. Now you can start taking your readings (explained below).

When you are finished, gently slide the stone off the hemicylinder and remove the stone with your fingers if possible. It is important to keep the hemicylinder clean, so use a clean cloth or tissue to gently wipe any remaining contact liquid from the cylinder. Do this gently without any pressure, making a North-South motion.

As mentioned above, the hemicylinder is made of a relatively low hardness glass and can easily scratch. So always make sure you keep abrasive materials and sharp objects (like tweezers) away from the hemicylinder.

Look at the images below to see how to properly use the refractometer.

We notate refractometer readings to a precision of 0.001 (one thousandths). The refractometer scale has subdivision indicators to 0.01 (one hundredths). Between the two horizontal bars which indicate the 0.01, you will need to estimate the third precision.

In the image on the right, you will see that the shadow edge is between the 1.54 and the 1.55 bars. Between these two values we need to find the last precision. As it is just above the middle, the last precision is 0.004. So the reading is 1.544 .

Estimating the last decimal needs some practice. Some refractometers, like the Eickhorst ones, have a more detailed division of the scales which makes taking a reading easier. With a little experience, you will find an easier-to-read scale is not needed.

Following is the method for taking RI readings that is used for faceted gemstones. En-cabochon and sphere cut gemstones require a somewhat different technique which is explained in the "distant vision" section.

When taking refractometer readings, one usually starts with the largest facet (which is usually the table facet). Place your stone in the starting position, then close the lid of the refractometer. Make sure the light source is on.

Position your eye in front of the ocular (the eyepiece) in a way so that it is at a straight angle with the refractometer scale. You will now most likely see a dark region at the top of the scale and a lighter region in the lower part. If you have chosen a monochromatic sodium light source, there will be a sharp line between the lighter and darker areas. That line is named the "shadow edge". (You may also observe 2 less sharp "shadow edges".)

Place the polarization filter on the ocular and, while looking at the scale, turn the polarizer 90 degrees left and right. You will observe either of two possibilities:

In the second case, where the shadow edge moves between two values on the scale, write down both values you see, in table form below each other.

Below are 4 sets of readings of a double refractive stone with a uniaxial optic character (where one reading value remains constant). For every set of readings, you rotate the stone 45 degrees with your fingers without applying pressure while leaving the stone in contact with the hemicylinder.

While taking your refractometer readings, write down the values you read on the scale. For every set of readings, the polarization filter is turned 90 degrees. In addition to this you can also take a fifth reading (180 degree rotation).

Note: The lower reading is the reading of lower value, not lower on the scale.

The RI of this stone is 1.544 - 1.553 (smallest lower reading and largest higher reading). This indicates quartz.

To calculate the birefringence of the gemstone being tested, you take the maximum difference between the largest higher reading and the smallest lower reading. In this example, that is 1.553 - 1.544 = 0.009 .

These readings give an biaxial reading with RI = 1.611-1.620 and a birefringence of 0.009, indicating topaz. You may have noticed some odd looking letters in the image footers, like α, γ, ε, and ω (and β). They are not typos but Greek letters whose meanings will become apparent in the discussion on optical sign, but that is an advanced topic. There you will also learn why we added the "difference" in the biaxial table.

Optical character refers to how rays of light travel in gemstones (or most other materials).
In uniaxial and biaxial materials, the incoming light will be polarized in two (uniaxial) or three (biaxial) vibrational directions which all travel at different speeds inside the gemstone. This is due to the molecular packing inside the stone. For a better understanding, we refer to the discussion on double refraction.

Gemstones are divided into three categories (characters) depending on the way a ray of light behaves as it passes through the stone:

Among those stones are the ones that form in the cubic system as well as amorphous stones, like glass.
• On the refractometer you will see one constant reading.

One ray of light will vibrate in the horizontal plane, which we call the ordinary ray (ω). The other will vibrate in a vertical plane along the c-axis and is called the extra-ordinary ray (ε). This extra-ordinary ray is also the optic axis (the axis along which light behaves as if being isotropic).
Gemstones that are uniaxial by nature belong to the tetragonal, hexagonal and trigonal crystal systems.
• You will see one constant and one variable reading on the refractometer.

Stones with a biaxial optic character have two optic axes.
The orthorhombic, monoclinic and triclinic crystal systems are biaxial.
• This will be shown by two variable readings on the refractometer.

This is the method used to estimate the RI of en-cabochon cut gemstones.

You place a very small drop of contact liquid on the hemicylinder and place the stone on the drop, on it's most convex side (as in the image on the bottom-right). Remove the polarization filter (if not already done) and close the lid.

Move your head back about 30 cm from the ocular and look straight to the scale. On the scale, you'll see a reflection of the contact liquid droplet. When you move your head slightly in a "yes-movement", you'll observe the droplet move over the scale. Try to fixate the point where half of the droplet is dark and the other half is bright.

The image at the top right shows three stages while moving your head. The top droplet is too light and the bottom one is too dark. The one in the center shows a good half dark/half bright droplet.

Now move your head toward the ocular and estimate the Refractive Index. Unlike with faceted gemstones, we estimate to a 0.01 precision when using this method. The image on the left shows the reflection of the liquid which is half bright/half dark at 1.54. This gemstone may be Amber.

Alas, one cannot determine birefringence using this method, unless the birefringence is quite large (as with the carbonates). The "birefringence blink" or "carbonate blink" technique makes use of a larger drop of contact liquid and a polarizing plate. As the plate is rotated, the spot will be seen to blink. A crude estimation of birefringence can be made by this technique.