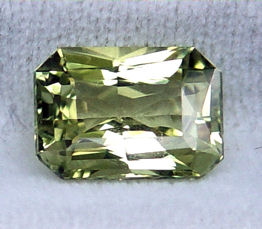 Chrysoberyl is a beryllium aluminum oxide, not at all related to the mineral beryl, which is a silicate. Chrysoberyl can occur in various shades of green, yellow, brown, red, and occasionally blue. The most valuable varieties of chrysoberyl are alexandrite, and cat's eye. Cat's eye was long admired in the orient for its chatoyant character, but it wasn't popular in the West until the late 1800's. The third and most common variety of chrysoberyl is a transparent greenish yellow stone. It was very popular in Victorian and Edwardian jewelry. Cat's eye is believed to protect one from evil spirits or the evil eye. According to the Hindus, the stone would preserve your health and guard against poverty. In Asia, it was thought that if you pressed a cat's eye between your own eyes it would enhance your foresight.